Grind peppers with a mortar and pestle.
Put ground peppers on a plate and lay steaks in it.
Mop up all pepper with the meat.

Bring 50g of butter to browning in a frying pan.
Add peppered steaks.
Fry for 5 minutes.
Remove steaks from pan.
Add cream.
Add a teaspoon full of flour.
Stir continuously (next time get help with vegetables at this point).
Add brandy (recipe said add before cream, but this made no difference).
Keep stirring.
At this point we diverged:
Both options worked for respective diners :)

Turkey and Ham Pie and Brawn 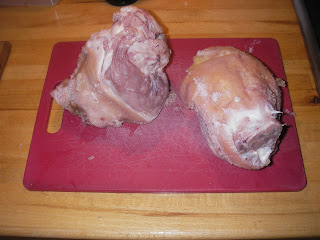 Separate the hocks into meat and other.
Add pepper corns, orange peel and bay leaves to ham in a pan, add one litre water.
Bring to the boil and simmer for fifteen minutes, this is intended to remove the excess salt.

Drain liquor, allow meat to cool.
I then added more, cold, water to meat and left to stand for an hour, in the hope of removing more salt. Drained salty water. Meat now weighed 755g.

Fry onions, lightly, with shallots.
Allow to cool and place in sealed container.
This large amount of turkey and ham will form the basis for a number of meals. 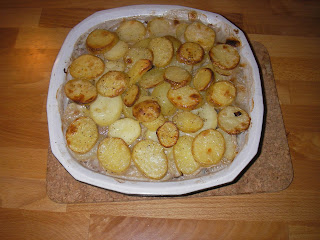 Slice eight new potatoes and cook in a microwave, with a little butter.
Place pie mix into pie dish.
Flatten and then arrange potatoe slices on top, ensure that any melted butter is added to dish.
Cook in oven at 150°C for 30 minutes.

The other from the hocks consists of fat, jelly, bone and skin, with a little meat. It now has broth from meat desalination. We will see if this ruins it. I am thinking, at this point, of adding a raw potato next time, or giving the hock a quick boil when whole to remove some of the salt. 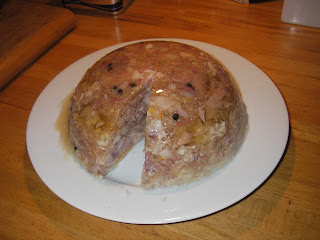 The boil for two hours.
Next time remove the orange peel after half an hour.
Remove bay leaves, as many peppers as you can be bothered with, as much of the orange peel as you can find.
Poor into bowl with a plate on top, place outside to cool.
Next time Do not remove orange peel it is a welcome addition. Boil whole hocks in two changes of fresh water before anything else.

Verdict Whilst a bit too salt this worked very well, will try again.
Posted by Tim Pizey at 19:14 No comments: