Apple Juice and Cider of a Sort

We had the second Campbell Road Apple Day and Barbeque on Saturday. The weather was good and we had loads of kids: Evanses, Ruddocks, Greens, Chandlers and Acklands. 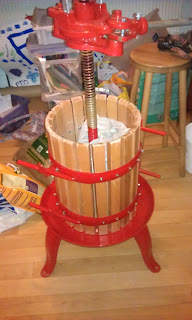 I had borrowed a fabulous Apple Press from a kind colleague.

I had a few windfalls, cookers from John and windfalls from Warnford Orchard. Mark and Stuart brought loads more, and Mark still had some left at the end.

The technique was to wash, quarter and remove any rot or insects, then pulp with a heavy ash pole. We did use a drill scratter, which was better, but less fun. 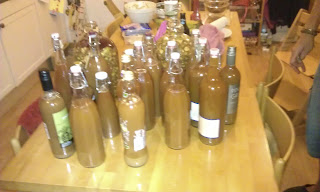 We pressed quite a bit of juice.

I filled (overfilled actually) two demi-johns with apple pulp and topped up with water. To one of them I added 0.5 kg of redcurrant pulp, seeds and crucially sugar, left over (for months) from making redcurrant jelly and putting the sugar in before straining.

I boiled some of the pressed pulp (some apples were rather hard and under pulped, anyway I was just not happy about throwing so much away), adding a couple of litres of water. 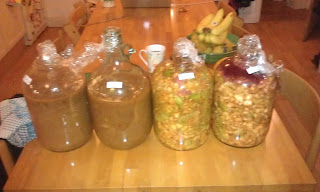 Once good and sloppy I let the slurry cool. This I ladled into two demi-johns, using the top half of a fizzy drink bottle as a funnel. The second was a little caramelised where it had caught on the bottom, I added a tablespoon of honey for variety. Both of them needed to be inoculated with raw juice to ensure the wild yeast was re-introduced.

There is talk of buying our own press for next year!